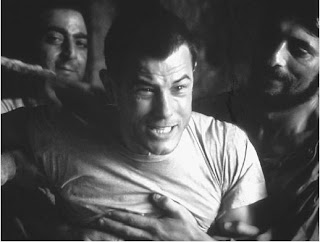 Here's one that should stir things up... In 1968 I would have delivered this rant while standing on a soap box on Telegraph Avenue. But now its 2008, so I do a podcast. Who's the one who's crazy?... In the piece I dig into my personal religious trinity (Judaism, Catholicism and Buddhism) while talking about my fear of Turkish prisons...

Music by "the profit" (sic) Robert Zimmerman aka Bob Dylan from his hypnotic song "Series of Dreams"... Image of Brad Davis from the film "Midnight Express"...

"Thanks for the download"
Posted by Lance Anderson at 6:47 PM

Midnight Express is one of those movies that just blow your mind. You're never quite the same after it.

It has taken me a while to wrap my head around this podcast enough to post comments.

I knew that I was in trouble with the opening advanced content warning--coupled with Bob Dylan's Series of Dream as the intro song--this one was really going to be something.

And what is it?

That is very hard to describe. Clearly, it is a monologue of the highest order. It is drama as well. Most importantly it is an effort to connect with the Universal and with human fears--with the paranoia that we have all felt when clarity turns and feeds the beast.

And how does it do that?

I it very hard to describe. The events of childhood merge with the absurdity of modern life--with the hidden threats in our violent world. Childhood hopes and dreams and even ways of thinking are evolved during the discussion with the religious attitudes and issues which we all currently find ourselves dealing. And with the personal experiences the strangely and often absurdly make memories--dream like things that have value only when expressed.

A great episode! Thanks, David S